Declaration - Union syndicale Solidaires - France
Capitalist system is still in crisis, we are all Greeks
Greek population has been mobilizing for several weeks to turn down their government’s austerity measures, taken under the double injunction of the European Commission and the IMF.

Those are dreadful compulsory plans and real structural adjustment programs: 4 out of 5 pension retirement will be replaced, VAT rise from 19 to 21%, 10% cut on health expenses, retirement pensions freeze, 15% cut on wage, legal retirement age postponed at 67 years, etc….

The reasons behind those attacks: Greece’s debt load is high with 12.7% in 2009. It’s not many more than other countries like UK (12%) or Spain (10%). USA and Japan’s rates were also two figures numbers in 2009. Everywhere, the financial gifts to support the banks, the cyclical crisis programs and taxes cut have gouged huge holes in the budgets.


Our governments have salvaged the banks from a certain bankruptcy, without compensation. Today, those very banks are leaning on those countries and have clearance to speculate on bad ratings. They are coming back to overcharge people. Greece is under attack, Portugal is in the line of fire, Spain and Ireland are threatened.

Far from resign itself, the Greek people are struggling and fighting back. Several strikes and demonstrations have already taken place. The 24th of February, a general strike has paralysed the country. European Union, far from showing solidarity, is dithering on her support and tries to take profit of it showing day after day its allegiance to financial markets, not to people.

The domino effect is likely to be terrible.

SOLIDAIRES Union affirms its full support for the Greek people and will fall under all the unitary initiatives of support with this righteous struggle of the Greek people, in particular with the general strike of May 5.

In Greece like elsewhere, it is not to the people to pay their crisis!

the revolution won't be televised, bloggerized or twitterized 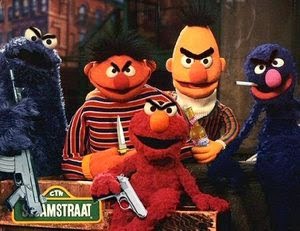